What is the History of Mission San Miguel Arcangel? 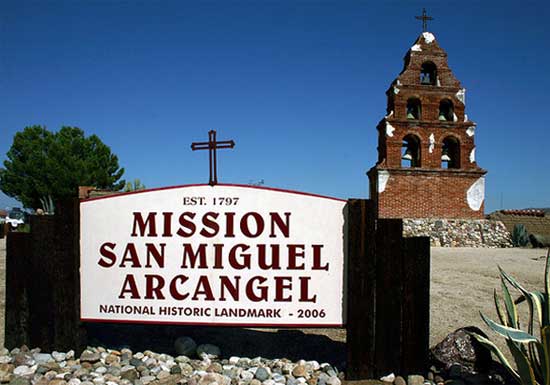 Father Fermin Lasuen, second Father-Presidente of the Alta California Mission Chain, founded the Mission San Miguel Arcangel on July 25, 1797. It was the 16th of California’s 21 missions, and it was the third mission Father Lasuen dedicated that summer.

At the mission’s dedication ceremony, the Natives appeared in force. They were anxious for the mission to open, having heard good things about the mission system. Fifteen were baptized that day, and Neophytes (Christianized Indians) came from other missions to show their support. Soon, the mission was a thriving center for commerce, tourism, and productivity.

The padres set the Natives to work laying adobe bricks as soon as the mission opened. After enough bricks had been laid, they began work on constructing the church. It still stands there today, 144 feet long, 27 feet wide, and 40 feet tall. The mission walls are six feet thick.

[ad#Google Right Cube 300×250]While its exterior was exceedingly plain, an artist from Spain was hired to paint the interior of the church. He designed pictures of balconies, angels, and more. A large painting called “The Eye of God” sits behind the altar, spreading rays of light over the congregation. The church has undergone several restorative efforts, but the paintings inside the church have remained untouched. The work seen there today exhibits the same design and color as originally intended.

How Did Mission San Miguel Arcangel Support Itself

Like most California missions, the Mission San Miguel Arcangel supported itself and the Native inhabitants of the area by growing crops of wheat and corn. They also raised herds of horses and cattle, and cultivated grapes in a vineyard. The local Indians were extremely talented tile makers. They made 36,000 tiles between 1808 and 1809, which were to be used at other missions. The Indian tradesmen made San Miguel well known for its tile production.

Today there is still a fiesta at the mission on the third Sunday of every September in order to honor the Feast of St. Michael’s Day. The mission serves as an active parish church today, acting as a center for the town.