What is the History of Mission San Juan Bautista? 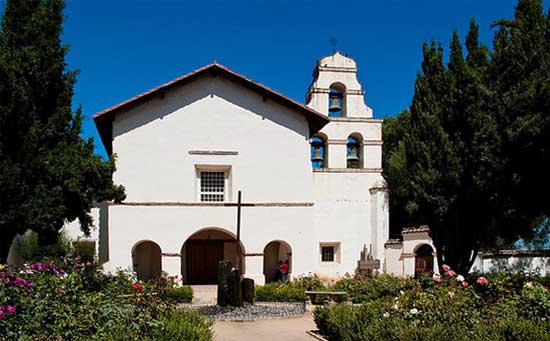 Father Fermin Lasuen, second Father-Presidente of the Alta California Mission Chain, founded the Mission San Juan Bautista on June 24th, 1797. It was the 15th of California’s 21 missions. Located in the center of the San Juan Valley, it sits directly on the San Andreas fault-line.

The mission was established only 13 days after Father Lasuen dedicated the mission at San Jose. The area was less dangerous than some other mission sites. The San Juan Valley was nevertheless an eventful place to build a structure. It’s located directly above the fault. That made for an unstable environment. The ground would often shake so badly that work would have to be stopped. The shaking was so severe that the padres were forced to sleep outside for the entire month of October in 1798. There were often as many as six small tremors a day.

The earthquakes at the mission did a lot of damage, but the padres compensated for the loss of structures. The Indian population at San Juan Bautista grew very rapidly, providing both the need and the labor for the construction of a new, larger church. So when a massive earthquake destroyed the church in 1803, another larger one was immediately begun.

The new church that the missionaries built was unique in its design. Instead of the long, single nave design that the other California missions had, the Mission San Juan Bautista had three naves. A long row of arches separated each nave, and the unique construction provided room for over 1,000 people.

Fearful that the arches separating the naves would not withstand an earthquake, the padres decided to wall off the side areas. This formed three main rooms: the center church nave, and two side wings. With this alteration in design completed, the new church more closely resembled the other mission buildings in the Alta California Mission Chain.


How Did Mission San Juan Bautista Support Itself

Like most California missions, the Mission San Juan Bautista supported itself and the Native inhabitants of the area by growing crops of wheat and corn. They also raised herds of horses and cattle, and cultivated grapes in a vineyard. The agricultural success of the mission sparked a huge trade industry to grow up around San Juan that included hides, tallow, and other farm products.

The town of San Juan Bautista began as a mission town, but soon grew to be much more. During the California Gold Rush, the area became packed with eager forty-niners looking to make their fortunes. The town still stands today as a booming Western city.