What is the History of Mission San Diego de Alcala? 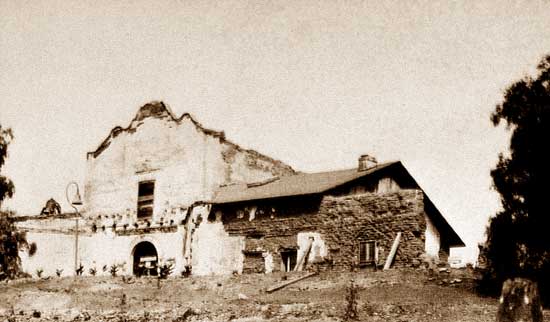 What Was The First California Mission?

Father Junipero Serra founded the Mission at San Diego de Alcala on July 16th, 1769. It was the first of California’s 21 missions, and it began what would become known as the chain of the Alta California Missions.

This photo was taken some time in 1910 in San Diego County, California

What is the History of Mission San Diego de Alcala?

Father Serra named the mission for St. Didacus of Alcala, Spain. He established the mission’s location when he and his men planted a cross in the ground and hung a mission bell from a nearby tree. The original structure created at this site was crude and unable to support its tenants. Unfavorable water conditions and land that was unable to grow crops forced the settlers to abandon their homes at the original site and establish a new mission six miles up the river.

What Were the Native Americans Like Near Mission San Diego Alcala?

Unfortunately, the missionaries faced more problems at the new location. The Native Americans who lived in the area were angry at the invasion of their land by foreigners. In 1776, they mounted an attack against the settlers, setting fire to the mission and surmounting what would become known as the worst Indian attack on a mission ever. The Spanish, however, were not deterred from their purpose and simply increased their military presence at the site.

How Did Mission San Diego de Alcala Support Itself?

Like most California missions, the Mission San Diego de Alcala supported itself and the Native inhabitants of the area by growing crops of wheat and corn. They also raised herds of horses and cattle, and cultivated grapes in a vineyard. The mission maintained an economy that was based on local assets, including things made by the Native women, fruit grown in orchards, and supplementary herds of sheep. Ultimately the mission was not as successful as many of the other settlements.

While the mission grew steadily and was eventually able to sustain its inhabitants, it never proved itself as lucrative. Instead, it served as a resource for the locals and a resting place for missionaries traveling through the area. Today the Mission San Diego de Alcala sits on a hill overlooking the city of San Diego, California. San Diego has grown to be a very large and important city, and its roots are forever embedded in its beginning as a mission site.

Where Can I Learn More About Mission San Diego de Alcala?

What is the Official Mission Website of San Diego de Alcala